This page is dedicated to those officers who paid the ultimate price while serving Jefferson County.

Sheriff Church was returning from a business trip to Jefferson City, Missouri, when he was involved in a fatal auto accident on Highway 30.   The Sheriff's wife Helen, was appointed as Sheriff of Jefferson County to fill the unexpired term of her husband. 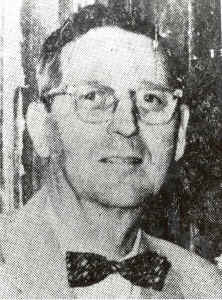 Chief Deputy Marsden responded off-duty to Highways 21 & 110, in response to a failure to pay for gas.  Chief Marsden placed the suspect in the car to discuss the incident.  A struggle ensued and the suspect killed Marsden with his own duty weapon.  The killing of Marsden was witnessed by his wife, who was a passenger in the car.

Deputy Myers was seriously wounded by gunfire while encountering an armed gunman, in a hostage situation. Deputy Myers was confined to a wheelchair as a result of his wounds.  He succumbed to his injuries on July 31, 1980.

Deputy O'Connell conducted a routine traffic stop on Highway 30.  The driver of the car, Jack Lindsey, suddenly drew a handgun and fatally shot Deputy O'Connell.  Lindsay was captured after a long manhunt and is presently serving a life sentence, in the Missouri Department of Corrections.

Image does not exist

Marshal Willis Dearing was shot and killed while attempting to arrest a drunk man in a city street. The suspect had been asking for credit in a local bar and fired a shot into the street when the owner refused.  The man then shot Marshal Dearing as he attempted to arrest him.  Marshal Dearing was predeceased by his wife and five children. Four of his children were from his first wife.

World War I veteran, Jefferson County officer for several years including time as deputy sheriff. Struck and killed while directing traffic from a previous accident, struck by a beer truck and dragged 200 feet.

Patrolman LeCompte succumbed to gunshot wounds received 29 days earlier when he was shot with his own service weapon during a struggle with a burglary suspect. Patrolman LeCompte remained hospitalized from the time of the shooting until succumbing to his wounds.  Police dragged the suspect from the Meramec River the next day after he was wounded in an exchange of gunfire.  Patrolman LeCompte had been with the agency for two years and was survived by his two young daughters.

Patrolman Jarvis was killed in an automobile accident on I-55 while on duty.

Detective Strehl was killed when the helicopter he was riding in crashed near Antonio in Jefferson County, Missouri. Officer Strehl was on a special DEA task force on drug surveillance when the accident occurred.  Detective Strehl is survived by his wife and three sons.